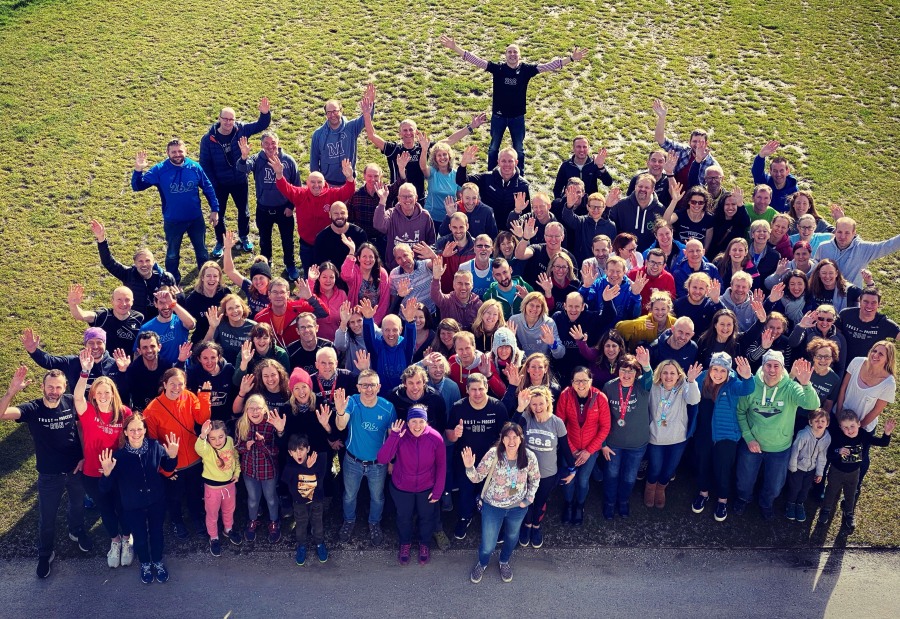 On Friday February 21st 2020 small groups of people laden with bags full of running shoes and kit (or no running kit at all in one or two cases) were making their way by plane, trains and automobiles to Mount Cook Adventure Centre in Derbyshire for the much anticipated Marathon Talk Run Camp. Paths were being beaten from as far afield as Cornwall and Inverness to the picturesque and rugged Derbyshire Dales, once more to meet up with old friends or to make new ones.

I was travelling with a posse from Abingdon AC. We left just after rush hour on Friday morning with plans to take the cable car up to the Heights of Abraham at nearby Matlock Bath for lunch and a visit to the caverns, before then heading to Mount Cook for late afternoon.

We arrived at Mount Cook to find many already there and after getting settled in our rooms and deciding who would be on the top bunks, congregated in the dining area. We spent the first evening getting to know some of the other run campers. Runners always seem a friendly lot, so it wasn’t difficult to start conversations, particularly with the Marathon Talk hosts who were always happy to chat. Before heading off to sleep we had a quick look at the weather forecast for the weekend ahead. The Met Office forecast looked more promising than the BBC Weather forecast, with less chance of rain when we’d be running.

Glancing out of the window on the Saturday morning at 7 am revealed somewhat of a deluge, with the hope that 2 hours later it might no be so wet.

After a breakfast of toast and porridge we all headed out in to the now less rainy Derbyshire Dales to convene at Bakewell parkrun. The start of Bakewell parkrun is at the delightful cafe and shop now occupying the old Hassop Station. The run is and out and back run along the Monsal Trail. We’d discussed long and hard about the best shoes for the trail, with some favouring trail shoes and others road shoes. The surface was compacted trail that wasn’t muddy, but the rain had left it a bit puddly. Road shoes would not be a problem I was glad to see.

After a great welcome from the RD we were sent on our way along the Monsal Trail. The run out was slightly uphill and into the wind, which meant we were having to work a bit harder than expected for the last 500m of the outward run.Once we’d reached the turnaround point we had the wind in our backs, for the gentle slope back to the finish. It was at this point that a rainbow appeared, closely followed by a very brief rain and hail shower. Blue skies welcomed us at the finish and we retired to the cafe for our hobbitesque second breakfasts.

After lunch back at Mount Cook Tom, Martin, Holly and Tony held an afternoon Q&A. We asked about motivating ourselves when things don’t go to plan; what ‘real meaningful success’ looks like and ‘the shoes’ among other things.

We then headed out for a session on the High Peak Trail. Those who were running headed off for a gentle jog up the 640m long 12.5% Middleton Incline to Middleton Top Engine House, where Tom let them know what the session would involve. Holly had organised the runners into groups, Tom set them off (after make some changes to the groups) at 30 second intervals for :

This was repeated every 12 minutes for 3 reps. At the last rep we formed a tunnel to cheer in the sprinters up the incline.

The evening was kicked off by a great Q&A with Richard Whitehead – double leg amputee World Marathon record holder and double 200m paralympic gold medallist and multiple World Champion. Martin and Tom asked Richard questions about his running career and his legacy, including questions about the regulations his running blades need to comply with; how he’s dealt with setbacks and disappointments and how elite athletes should remain relatable to those in the grass roots of the sport and the general public.

This was followed by Tony and Holly drawing the raffle which raised more than £600 for 5K Your Way.

Stand-up comedian Rob Deering from the Running Commentary podcast then entertained us with a musical, loop pedal filled routine on running, the dangers of Lego and early 90s dance music to run to.

It was a great evening of fun, inspiration and laughter.

The Met Office forecast proved correct again and the rain seemed to be holding off on Sunday morning as the sky brightened during breakfast. We made our way to Carsington Water for the 10K and Half Marathon. Many of us were running, others like the Yelling and Williams families were there to offer their support and encouragement, which was greatly appreciated.

Tony’s weekend seemed to be a live episode of Tony’s Trials. The singer he’d been planning to see on Saturday night cancelled, so he was with us for the whole weekend, however he pulled his hamstring during Bakewell parkrun, so couldn’t run at Carsington Water. This meant he was there to cheer us on and take some great photos too.

The rain held off for most of the race, but there were lots of puddles and quite a wind to make the undulating course more challenging. This was particularly true for the half marathon stretch along the dam where a side wind seemed to almost bring us to a standstill as we ran through the almost constant puddles along its length.

Back at Mount Cook we showered and packed before staging the biggest #kitaroundtheworld photo. We said our farewells in the hope of meeting up again for Run Camp 2021.

Thanks to everyone who made my first run camp memorable. Let’s hope our year ahead is full of real meaningful success.

It all started on Saturday March 7th 2015 at Abingdon parkrun. On Saturday just gone I completed my 150th parkrun. This got me thinking about the things I’ve done in that time that I wouldn’t have done if parkrun wasn’t a part of my life – what parkrun has done for me.

It’s always inspiring to hear in the parkrun newsletter or on podcasts like Free Weekly Timed or Marathon Talk about the positive impact parkrun has had on those who volunteer, walk, jog or run regularly. There are those who have turned around dangerously unhealthy lifestyles, or have come back from the depths of serious mental health problems or overcome anxiety or loneliness through involvement in the parkrun community.

I don’t really have such a dramatic story. My active life before parkrun was that of a moderately active middle-aged bloke. I had run a couple of charity fun runs when I was in my 30s and regularly played five-a-side football, which kept me reasonably fit, but I’m sure I wasn’t as active as recommended. I’d heard of parkrun from my sister who had run a few, but wasn’t that interested to join her. That was until some colleagues and I entered a team into a 5K obstacle race, so I thought I’d better make sure I could at least run 5K .

So, on March 7th 2015 alongside 278 other people I turned up at Abingdon parkrun #186. I only knew 4 other people there (two of whom were my sons who’d decided to join me for their first parkruns too). As with any previous attempts I had made to start running I went off too quickly, so at the 4k mark the feeling of being seriously out-of-breath was so uncomfortable that I had to stop and walk for a bit. I managed to cross the finish line after a time of 29:44. I’ve managed to get a lot quicker since that day and achieved a parkrun PB on my 149th parkrun last week.

It wasn’t long before I could honestly say I enjoyed running and I couldn’t have imagined all the things that I have experienced through running had I not begun parkrunning. I would never have:

These are all amazing things, unthinkable to me five years ago, but they aren’t the things that I’m most grateful to parkrun for. As I mentioned above, other than my children I only knew two other people at my first parkrun. I’ve just checked the results of that first parkrun and counted about sixty parkrunners from the 278 there that day that I now know. This is now true of close to 150 current regulars at Abingdon parkrun, many of whom I would consider my friends.

I mentioned above that I ran a new PB at my 149th parkrun. This happened to be at Cardiff parkrun on Saturday February 1st, where Charlotte Arter ran the fastest ever parkrun by a female runner. Where else but parkrun could an ordinary runner run a PB and chat afterwards to a fellow runner who’d just broken a world record!!